RAID stands for Redundant Array of Independent Disks which is the organization of multiple disks into a large, high performance logical disk. Disk arrays stripe data across multiple disks and access them in parallel to achieve higher data transfer rates on large data accesses and higher I/O rates on small data accesses.

According to various combinations of approaches giving different levels of protection against data loss, capacity, and speed, several levels of RAID are available, including RAID 0, RAID 1, RAID 2, RAID 3, RAID 4, RAID 5 and RAID 10 (1+0), etc.

How to clone RAID array in an easy way?

To clone RAID array, Launch EASEUS Todo Backup and locate the “Clone Disk” in the main board or toolbar. 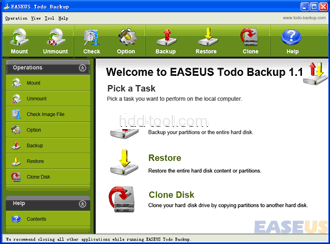 Select the source disk, in fact, the RAID array is detected as a physical hard disk both by Windows and EASEUS Todo Backup, and then choose the target disk. Before this, you’d better build the new RAID array by large disks. When selecting the target disk, please select this array and other operations are quite easy to be completed. If you need step by step instructions, please refer disk clone guide