Hardware RAID array is common storage device in a server. In most of servers, RAID 1 is used for operating system and programs, RAID 5 is used for saving data. Hardware RAID has many advantages than single physical disk, but you won't find any difference in daily usage. Before saving files to a RAID array, you also need to initialize, create and format partition. The same with physical disk, you also need to shrink a large RAID partition to create new volume or extend another RAID partition that is getting full. This article introduces how to resize RAID partition in Windows Server 2019/2022 without losing data.

Any difference while resizing RAID partition and physical drive?

Many people think it is complicated to resize virtual partition on a RAID array, but it's not. Hardware RAID arrays are built with 2 or more physical hard disk drives, the advantages are realized by RAID card/controller. After building the RAID array, you get a "virtual" disk in Disk Management and it's numbered the same with other disk. To both operating system and NIUBI Partition Editor, there's no difference if you use single SSD, mechanical HDD or RAID array. Better than Windows Disk Management and other disk partition software, NIUBI Partition Editor shows the model of all storage device on the main window. So you'll see clearly the interface (SATA, SCSI, USB, NVme, etc.) of a single disk, RAID array will be marked, too.

When you resize RAID partition in Windows Server 2019/2022 and other versions, don't break RAID array or do any operations to RAID controller, follow steps below.

The same with previous versions, Windows Server 2019/2022 has 2 native tools - Disk Management and diskpart command tool. Both tools can shrink and extend partition without losing data (in most cases). However, they cannot extend a partition by shrinking another one. To be accurate, they can only shrink NTFS partition to create new volume, or extend a NTFS partition by deleting the contiguous partition on the right.

To resize RAID 1/5/10 partition in Windows Server 2019/2022, third party software is more powerful. However, you'd better make a backup in advance and run safe partitioning software. Better than other tools, NIUBI Partition Editor is much safer and faster because of advanced technologies: 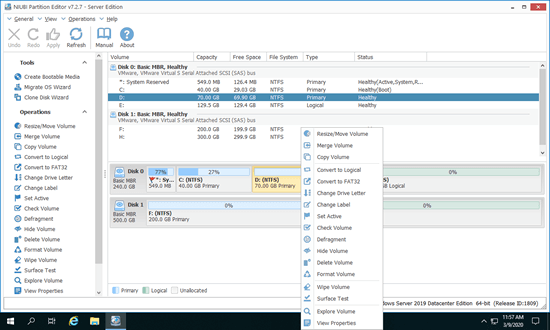 In most cases, there's free space in other virtual partition on the same RAID array. To shrink and extend RAID partition in Windows Server 2019/2022, you just need to drag and drop on the disk map. Follow the steps in the video.

How to extend system partition C by shrinking data volume: 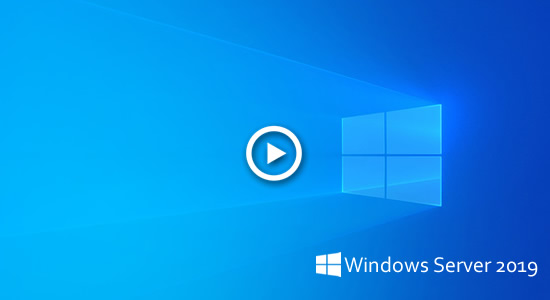 How to extend a data partition by shrinking another one:

If the RAID array is almost full, it is more complicated than a single hard disk while extending RAID partition in Windows Server 2019/2022.

RAID 1 is built with 2 hard disks, you cannot increase RAID 1 array by replacing with larger disks one by one. If you do like that, you'll get another RAID 1 with same size, the remaining space will be wasted or used to create another RAID array.

If you cannot connect 2 RAID 1 to the server at the same, follow the steps:

If your RAID controller has the ability to rebuild RAID 1 without losing data, it's much easier, follow the steps:

RAID 5 are built with at least 3 hard disk drives. When RAID 5 array is full, firstly make sure your RAID controller can rebuild array without losing data. If yes, to extend RAID 5 array in Windows Server 2019/2022, you may either add new disk or replace disks with larger ones. After rebuilding array, additional space is shown as "Unallocated" at the end of RAID. Then follow the steps to move and merge Unallocated space to other partition(s).