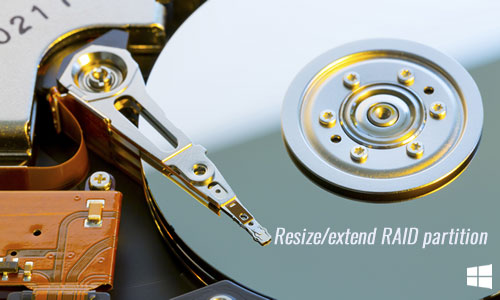 Many servers are built with hardware RAID arrays such as RAID 1, 5. Generally speaking, RAID 1 is used for Operating System and programs. If one of disk is broken, it can be swapped fast without server offline. But all space of a disk is "wasted", it is not the best cost-effective solution for data storage.

After the RAID array is built, the size of virtual disk is fixed, is it possible to resize RAID array virtual partitions without losing data? Yes, this article introduces how to resize RAID partition in Windows Server 2012 with both native and 3rd-party tools.

Server 2012 Disk Management has Shrink Volume and Extend Volume functions to help resize allocated partitions, however, both functions have many restrictions. It can only help you decrease a drive to create new or extend a drive by deleting the adjacent partition on the right. It cannot extend a RAID partition by shrinking other one.

All you need to do is dragging and dropping on the disk map. Operating System, programs and associated settings, as well as anything else keep the same with before.

Download NIUBI Partition Editor and follow the steps in the video to shrink and extend RAID partition in Windows Server 2012 (R2):

How to extend system partition C: by shrinking other data volumes:

How to extend drive D: by shrinking system C or other data volume:

There is potential system and data damage risk while resizing RAID partition (and physical volumes), you'd better back up first and run safe disk partition software. Comparing with other software, NIUBI Partition Editor is much safer and faster because of its innovative technologies such as:

There are several tips you should know before resizing and extending RAID virtual partition in Windows 2012 Server:

If there is not plenty of available free space in the same virtual disk, no software can add space from other separated virtual or physical disk. In that case, you can copy and migrate to a larger disk or raid array. Watch the video:

To Operating System and NIUBI Partition Editor, there is no difference if you use local physical disk or RAID array. No matter what type of the raid is, or what its controller is.