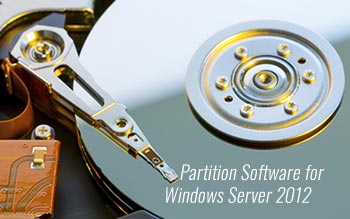 The same with other Windows client and Server, the most common issue in Windows Server 2012 is low disk space of C drive. It is easy to understand, Windows Updates, programs and many other types of files write into C drive continuously, so C drive will become full sooner or later. Many people ask whether it's possible to expand C drive without losing data. The answer is yes, but you'd better backup first and run safe disk partition software for Windows Server 2012 (and R2).

What's inside of the server partition software 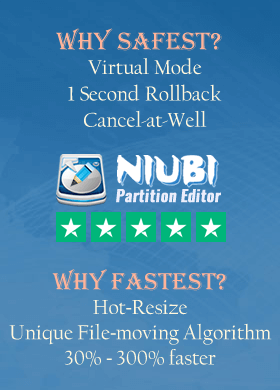 Migrate OS to new disk, clone entire disk or single partition to back up or migrate data. 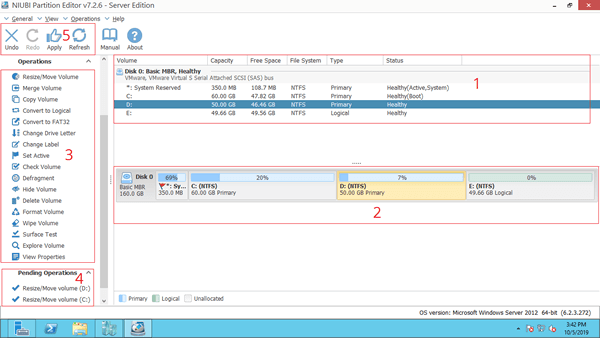 Unlike other disk partition tools that list all options, NIUIBI only lists the available operations to keep interface clean, unavailable options are hidden automatically.

Data is most important to a server, but there is potential data loss risk while resizing partitions or do other modification, because the parameters of all associated disk, volume and files must be modified absolutely correct. Any one incorrect parameter could cause system boot failure, partition corruption or data loss. Besides software error, some hardware issue such as power failure cause damage, too. Therefore, you'd better run reliable and safe partitioning software for Windows Server 2012.

Some server administrators do not pay enough attention and found it is too late when damage occur. Every server is protected by some backup program, but it cannot do everything, for example: when system or a drive was damaged, it would spend several hours or even a whole day to restore, check data integrity and finish other operations. It is no doubt a disaster if a server offline for such as long time. In addition, if the backing up is not in real time, some data will be lost.

Better than other tools, NIUBI Partition Editor has advanced technologies to protect system and data:

It is also important to keep server running online, but when you copying disk, shrinking a partition towards right or moving a partition, it requires server rebooting to proceed. The more files in this partition or disk, the longer time to finish. A good algorithm is very important and helpful to save time.

Thanks to the unique file-moving algorithm, NUIBI Partition Editor is 30% to 300% faster than other disk partition software for Windows Server 2012. In some conditions such as very low RAW, very high CPU usage or large amount of files, it could be 5 times faster. This is strictly tested. If possible, you may compare it with other tools in same condition with a timer.

Other benefits of this partition editor for Server 2012

The built-in Hot Resize technology can extend NTFS partition in Windows without rebooting. Nowadays, most partitions of local hard disk is formatted as NTFS, so close other running applications and opening files/folders in a partition, NIUBI can extend this partition on the fly.

The pending operations that marked as

can be done in Windows, and the others that marked as

How to resize and manage Server 2012 partition

Because of its data protection and fast resizing ability, easy to use with neat interface, as well as plenty of disk/partition management features, NIUBI Partition Editor is recommended as the best disk partition software for Windows Server 2012/2016/2019/2011/2008/2003.