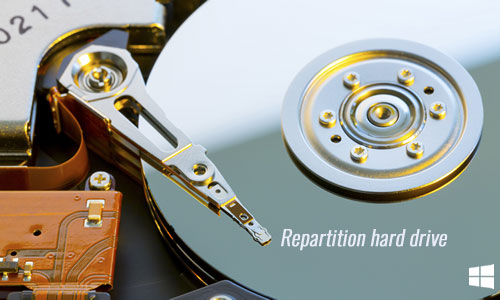 Low disk space issue is very common on a server, especially to the system partition and the drive for exchange, database and backup. It is much more complicated to system C: drive, because you cannot solve this problem by transferring files or changing settings. Hard drive partitions are allocated while installing Operating System or getting from OEM manufacturers. Is it possible to repartition hard drive on Windows Server 2012 without losing data?

The answer is yes, but you should take care of data and use right tool.

To repartition disk volume, Windows Server 2012 has two built-in tools: Diskpart command and Disk Management. The advantage is safe in most cases, disk partition can be shrunk and extended on the fly. But because of some restrictions of both tools, you cannot shrink or extend partition in some cases.

The most common and serious restrictions of both Diskpart command and Disk Management include:

It's better to show you the restrictions with Disk Management. 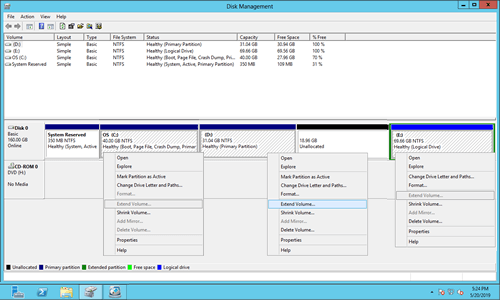 There is 18.96GB Unallocated space that is shrunk from drive D. Extend Volume greyed out for both C: and E: drive.

C: drive is nonadjacent and E: is on the right of the Unallocated space, so Extend Volume is disabled.

In a word, both Diskpart and Disk Management can only help you reduce NTFS partition to create new, or extend NTFS partition by deleting the adjacent partition on the right.

Download NIUBI Partition Editor and follow the steps in the video to repartition hard drive on Windows Server 2012 R2.

When there is available free space in the same disk:

When there is no other volume or not enough free space in a disk:

In most of servers, there is free unused space, so you can transfer to the drive that is getting full, no matter you want to repartition system C or any data volumes.

Note that the free space can only be transferred inside a hard disk, no software can extend a partition by adding space from another separated disk. If there is no available free space in the same disk, follow the step in second video and clone disk to a larger one.

If you use any types of hardware RAID arrays, VMware or Hyper-V, there is no difference to repartition these virtual disk.

Data and keeping online are most important to a server, but there is system damage and data loss risk while repartitioning disk on a server. So back up first before any operations. Besides backing up, it is also important to run reliable tool.

As the safest tool, NIUBI Partition Editor has unique 1 Second Rollback technology, which is able to automatically reverts server to original status in a flash if encounter any error. If it happens, server could back online rapidly without modification.

To help repartition disk drive better and faster, NIUBI Partition Editor has other advantages such as: