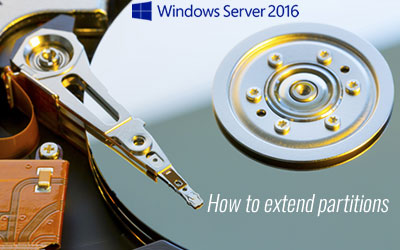 Many server administrators want to extend disk partition after running the servers for a period of time, the typical example is that system C drive runs out of space. Windows native Disk Management cannot extend partition by shrinking another one, so a reliable third party software is needed, then which one is the best? Server disk partition configuration are different, some use physical hard disk drive, some use RAID arrays, some use virtual disk, then what is the right method? This article gives complete solution to extend partition on Windows 2016 server without losing data.

How to extend partition on the same disk

To a server, system and data safety are most important, but there's potential system damage and data loss risk while shrinking and extending allocated partitions. Therefore, it is very important to back up first and run safe partitioning software.

Better than other tools, NIUBI Partition Editor has powerful technologies to protect system and data, for example:

It is also 30% to 300% faster because of the advanced file-moving algorithm.

When there's free unused space in any partition, you can shrink it to expand another one on the same hard disk. You just need to click, drag and drop on the disk map of NIUBI Partition Editor.

Download NIUBI Partition Editor Server, you'll see all disks with graphical partition structure on the right side. Available operations to the selected disk or partition are listed on the left and by right clicking. 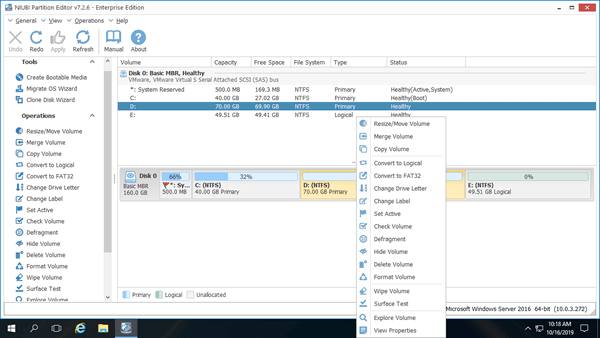 How to extend partition C in Windows Server 2016 by shrinking other volumes:

If there's not enough free space in the contiguous partition D, you can shrink any nonadjacent volume on the same disk, but before adding Unallocated space to C drive, there's an additional step to move partition.

Watch the video how to do this:

The steps are similar if you want to expand D drive or extend System Reserved partition in Windows Server 2016.

How to extend partition with another disk

If there's no available free space in a disk, no software can extend partition by adding or moving Unallocated space from another separated disk. In that case, follow the steps to extend partition in Windows Server 2016 by copying to larger disk:

How to extend system drive and all partitions:

How to extend single data partition:

To Operating System and NIUBI Partition Editor, there's no difference if you use physical hard disks or hardware RAID arrays. If you use any types of hardware RAID array such as RAID 0, 1, 5, 10, do NOT break array or do any operations to the controller.

When extend RAID partition on Windows 2016 server, it doesn't matter about the brand, chipset of the RAID controller or how you build the raid array, find out the disk partition structure with Windows Disk Management or NIUBI Partition Editor.

How to extend virtual partition in VMware/Hyper-V

If you run Server 2016 as virtual machine in VMware or Hyper-V, similarly, check if there's available free space in the same virtual disk. If yes, simply shrink it to get Unallocated space and then add to the partition that you want to extend.

If there's no available free space in the same disk, you can expand the virtual disk directly without copying to other disk. After expanding disk, additional space is shown as Unallocated on the end of original disk. Then you can combine Unallocated space to the partition(s) that you want to extend.

When extending partition in Windows Server 2016, back up first and run safe partition software. No matter you want to extend partition on physical hard disk, any types of RAID arrays, or in VMware/Hyper-V, check if there's another partition on the same disk that has plenty of free unused space. If yes, shrink it to extend. Run NIUBI Partition Editor and follow the corresponding method above according to your own disk partition structure.